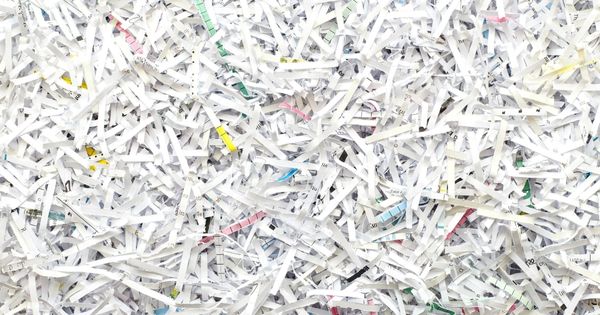 Paper shredders didn’t always look like the high-tech machines we know and use today. If you’re curious about the early days of paper shredding and how early shredders came to be, keep reading to learn a brief history of paper document shredding.

Would you believe that the first paper shredder design was patented over a century ago? A New York inventor named Abbot Augustus Lowe created the first paper shredder in 1909. He wanted to invent a wastepaper receptacle that improved the way we disposed of paper materials. He filed for a patent of his invention in February of 1909 and received approval in August 1909. Unfortunately, Lowe died before completing the construction and replication of his machine.

The Paper Shredder in WWII

The next notable installment of paper document shredding was its involvement during World War II. In 1935, a man named Adolf Ehinger used a machine similar to a hand-crank pasta maker to shred his confidential documents. He likely created and used his machine to destroy information that would lead back to him and his anti-Nazi propaganda printing practices. He patented his own machine in 1936, and the machine took off in Germany after Ehinger unveiled his invention at a trade show and promoted it.

Now that you know the origins of the paper shredder, you might be wondering how it grew from its meager beginnings into the mass-produced machines we use today. The average consumer or business outside of government institutions didn’t see a need for such a device until the 1980s. A court ruling in 1988 stated that the Fourth Amendment did not prohibit search and seizure of documents left in garbage outside the home. This sudden ruling sparked the importance of document security and paper shredding for many consumers. This was when households and businesses alike started utilizing the paper shredders we know and use today.

Did you learn something new about paper shredders with this brief look at the history of document shredding? If you’re interested in learning more about the features of modern shredders and how they work, check out our selection of high-security shredders and more at Capital Shredder Corp.